Elastography and Doppler Ultrasound are both physiologic technologies which show whether the cancer treatment is working or not.  They provide effective therapeutic markers over a blood test. Here is a 2-dimension elastogram of an atrophic adductor magnus muscle during post-trauma. This shows the gray muscle fibers going into a wider area, which is part fatty and part fibrotic. The fat appears as blue and the harder scar tissue shows up as red. This is confirmed by ultrasound and by MRI.

Elastography measures hardness of tissue and tissue healing through elasticity.  Hard scar formation or fatty changes is measured on the scale at the top right. FAT, which is soft, appears as blue (at 120) whereas the 480 level the scar tissue is harder. We know that scar tissue impedes muscle contractility greater than fatty changes, thus treatment can be appropriately applied to the type of tissue that needs regeneration.

SCANNING A TUMOR WITH ELASTOGRAPHY
Elastic ultrasound technology is an advancement where we can get real-time images, this scan shows the tumor from beginning to end as we scan through it. Notice that the blue area is the softer tissue and the hard tissue (with more aggressive) cancer is the red.  In this screen, we are able to have a comparative study of the regular ultrasound (below) and the elastogram on top.

After doing the real-time elastogram, we freeze frame a significant image showing the red area of active tumor on the bottom.  Fluid does not have elasticity, it does is not hard and it appears as black. Therefore the two top areas which we saw had low blood flow or no blood flow in the previous image have zero elastic qualities- meaning these areas that are dead and inactive. This also means that elastography is a usable treatment marker to show treatment effect. In other words, when you go from red to black, it means that the black area is a degenerated or dead inactive part of the cancer. 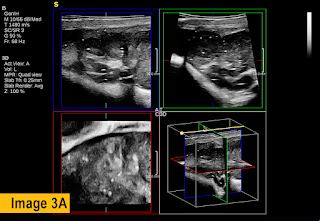 (Image 3A) Because we have a volume of the tumor rendered by the 4D ultrasound technology, this is used as the guide for robotic treatment with lasers, ultrasound freezing, or any other therapeutic technology.  In the above 2 scans and the bottom left image, these are 90 degree pictures of the same area that make up the bottom right cube, which is a volumetric representation of the tumor. This is used for treatment location of where to target the treatment exactly in the most aggressive area of the cancer. 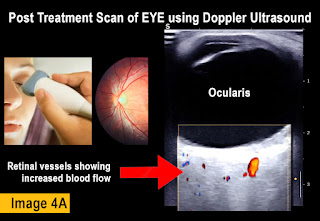 OPTICAL SCANNING
(Image 4A) This is a representation of the EYE and orbit, including the retinal vessels. So in this pre-treatment scan, we have blood flow of the posterior arteries showing vessels that are sub-millimeter in size.  This is a baseline study, pre-treatment to show the effect of treatment which is meant to dilate the arteries to increase blood flow.  At a top of the screen, we have a horizontal line which represents the iris (which is opening and closing). There's a a pause in the center of the lens of the eye near the very top.

Notice in the post treatment area, ON TOP, we see the iris opening and closing. And on the bottom, we see the vessels that are larger than previously indicating more blood flow, which is the expected treatment of energy-based treatment devices.

This is a spectral Doppler demonstrating, the effect of the increased blood flow QUANTIFABLY on the graph on the bottom where the biometric data indicates a maximal, systolic blood flow of 24 centimeters per second.