Osteoarthritis in the Hand: Observed Response to PEMF

Disclaimer: The information (including, but not limited to text, graphics, images and other material) contained in this article is for informational purposes only. No material on this site is intended to be a substitute for professional medical advice or scientific claims. Furthermore, any/all contributors (both medical and non-medical) featured in this article are presenting only ANECDOTAL findings pertaining to the effects and performance of the products/technologies being reviewed - and are not offering clinical data or medical recommendations in any way. Always seek the advice of your physician or other qualified health care provider with any questions you may have regarding a medical condition or treatment and before undertaking a new health care regimen, never disregard professional medical advice or delay in seeking it because of something you read on this page, article, blog or website. None of the information provided should be interpreted to be or is meant to be medical advice, suggestions, or counseling.

Osteoarthritis in the Hand: Observed Response to PEMF

In a observational review from an unrelated patient study, a 70+ year old female expressed increasing difficulty in daily hand functions like sewing, folding clothes and dish washing.  X-ray was done by a hand surgeon which showed arthritis of the first metacarpophalangeal joint. The bones were too close reducing range of motion in the thumb because the cartilage separating the bone was degenerated completely, validating the diagnosis of arthritis in the hand.  The surgeon concluded Osteoarthritis and this symptom is stated to be the most common finding in hand arthritis.

The patient reports showed that this was a long-standing illness of about 1 year’s duration with little therapeutic improvement from standard physical therapy and steroid injections. The patient elected to personally explore other therapeutic modalities and elected to purchase a commercially accessed PEMF on the hands.  Following the advice of the manufacturer’s clinical advisors, she applied the treatment on both hands twice a day for three weeks and documented her settings at medium power of 7/20 and 8/20 respectively.

The patient logged her progress after each week for three weeks.  According to her hand surgeon, hand function and range of motion appeared to show significant improvement. A subsequent imaging strategy of using a sonogram was performed each month prior to each meeting with the hand surgeon which indicated that the two millimeter thumb tendon appeared to show a consistent decrease in inflammation (by ___ percent). Evidence of this is seen from the Synovium (the lining of the tendon) had been the demitus(?) and dilated restricting motion. Whereas the follow-up sonogram, after the three weeks of PMF showed markedly decreased swelling of the tendon sheath. In both cases, the tendon itself was reported as normal. 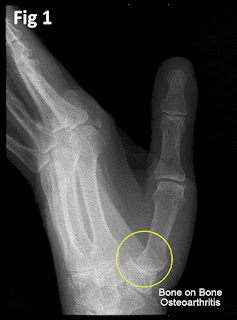 Fig-1: 1 year old x-ray shows narrowing of the thumb bone- (the base of the thumb with the beginning of the wrist bones) to be narrowed and arthritic.  The arthritis shows up as a decrease in the joint space and an increase in the whiteness of the reactive cortical bone. The First Metatarsal with the carpal bone (scaphoid).  Classic SCR arthritis of the hand: Physical therapy and cortisone injection of the inflamed tendon.
The key concern with any kind of osteoarthritis is called bone-on-bone, or the narrowing of joint space. The bone-on-bone is not the major cause of difficulty and symptomatology. Because of the abnormal bone, the tendons and the joints that are adjacent and affected become inflamed, which produce the major disability from the arthritis.

In essence, bone-on-bone is not the main cause of symptoms; it is the abnormal bony alignment that causes the tendons and the joint and the tendon linings to become inflamed. This change in the inflamed tendon lining was demonstrated by the before-and-after high resolution ultrasound of the extensor pollicis tendon (or the flexor pollicis)- the longest tendon in the thumb. 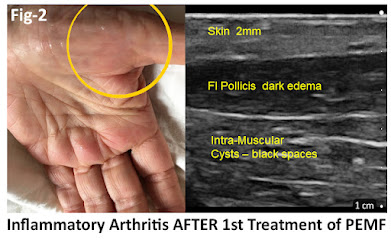 Fig-2: Before/after treatment by one month-  three weeks earlier.  Theoretically, the recently induced treatment of the PEMF appears to show decreased inflammatory response or a possible increase the body's healing function to reduce the inflammatory fluid in the joint space.

If this therapeutic technology in fact associated with improved mitochondrial function (the body’s healing process) as PEMF reports have claimed to perform- it may answer for the decrease in inflammatory reaction resulting in a “normalizing” or swelling reduction of the tendon sheath. 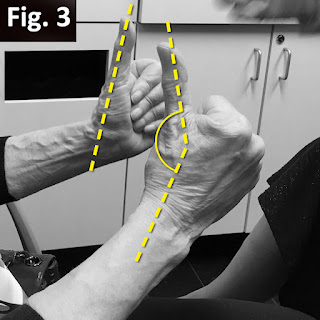 Fig-3: The right thumb is visibly able to position up to a 90 degree angle whereas the limited flexion of the left is at a 70 degree angle, which has improved from previously being at a 50 degree angle (from prior reports) demonstrating 20 degrees improvement – reportedly from the PEMF therapy in combination with the patient’s regularly scheduled PT treatments.  Within the 30 days of this self-induced PEMF treatments, the patient stated that immediate response of “mild, gradual” pain relief then progressive reactions of more range of motion and less struggle (by __ to___ percent)- adding to progressive improvement in hand function and range of motion.   The pain reduction was noted in the left hand as compared to the right because there was increased ability to grasp and perform finer motor functions like sewing due to the improved range of motion due to the decreased inflammatory picture.

Both hands appear to show improvement but the left hand is symptomatically much worse.

Edema vs pain;  the inflammation of a tendon can be in the tendon or the sheath of the tendon, or both. In the case of this patient, the two millimeter thick tendon showed almost two millimeters of synovial fluid, which is inflammatory debris from the active arthritis, tenosynovitis in the thumb. As the fluid restricting the joint decreases, the motion will improve and of course the tension in the joint which is painful will improve as well.

Afterthought: While you can't repair arthritis without major surgery to the bone, the symptomatology which is what is limiting for every day routine functions and housework can be dramatically improved so functionality of the hands can be managed with an aspirin instead of a months of long surgical recovery.

The results from this limited exploratory treatment and logic dictates that with additional and continued exposure to this PEMF therapeutic modality, further improvement and prevention or the formation of further inflammation may be possible. Managing the existing disorder may address further potential re-injury or progressive symptoms from this abnormal thumb joint.

This concept of prevention also links to managing serious impairment and prolonged damage to the tendon which can result in scarring and further degradation of the hand function.

RLB has other x-ray angles to offer.

SPECIAL THANKS: Our publishers would like to provide special thanks to Mr. Pat Ziemer, chief technical officer of AURA WELLNESS PEMF technologies.  MedTech Reviews program published by the AngioFoundation (510c3) shares information about technologies for public knowledge whereby the use of any demo technologies mentioned for this article are strictly for informational and academic purposes and are by no means presented as direct marketing for any specific brand, model or device.  None of the information provided should be interpreted to be or is meant to be medical advice, suggestions, or counseling.
- November 24, 2021 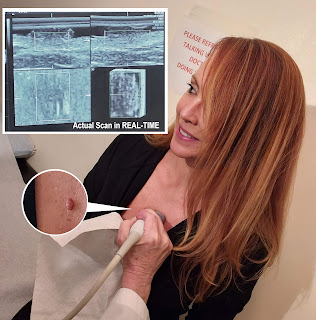