A recent review of patients showing elevated traces of HEAVY METALS in the bloodstream appear to also show concerning reactions on and under the skin- particularly from raised-to-high ARSENIC and MERCURY levels as indicated in the patients’ blood tests. These cases appear as significant skin disorientation as a result of heavy calcium buildup within the dermal area as shown by ultrasound imaging.

HEAVY METAL BLOOD TEST:
To note, metals are everywhere in our lives.  They exist in our foods, our drinking water, our medicines and even in the air we breathe.  But the concern of ‘poisoning’ occurs in abnormal levels of certain metals- where a heavy metal blood test is called for.  This specific test (in the blood) measures the levels of potentially harmful traces of common metals like arsenic, lead, cadmium and mercury. Metals that are less commonly tested for include copper, zinc, aluminum, and thallium.

According to regulatory publications like the NIH, effects of heavy metals in the body if left unmanaged can range from: abdominal pain, nausea, vomiting, and diarrhea to heart abnormalities (ie. dysrhythmia) to nervous, renal liver and Lung disorders.  Others may even display brain dysfunction such as memory loss, malformed bones in children or miscarriage or premature labor in pregnant women. [1]

For the purposes of this article, we are reporting on the concerning pattern (and the potential link) that patients with high metal readings appear to also show these unique dermal disorders and calcium deposits. What is recognized as “heavy metal poisoning” 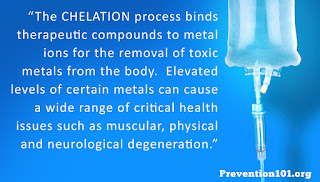 The chemistry behind chelation therapy was not invented; it was discovered.  The Swiss Nobel Laureate Alfred Werner in 1893 suggested the chemical structure that was later confirmed by others.  This chemical structure which involves an organic molecule surrounding a metal ion was defined and termed “chelation” in 1920 and in 1913 the Nobel Prize was awarded for discovery of chelation chemistry.

Chelation therapy as a medical treatment, in part, is the use of a chelating agent (organic molecule) introduced into the body, ideally as an infusion (intravenously).  As it circulates around the body, suspended in the bloodstream, it will attract and surround a metal ion.  The resulting complex, chelating agent (organic molecule) and the surrounded metal ion will eventually pass through the kidneys.  The kidneys recognize this complex as not being food and not needed or wanted and it is filtered from the bloodstream through the kidneys into the urine and then eliminated from the body.  More in a moment about why the activity of de-burdening the body of minerals and metals can be so therapeutic.  (see complete article)

Basic cellular biology dictates that our circulatory system travels all minerals and nutrients through our bloodstream.  In best cases, our immune system should maintain the distribution balance of all these minerals from any potential overload.  This overload may reach toxic (and hazardous) levels- whereas solutions such as CHELATION THERAPY may be recommended. 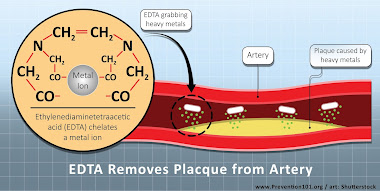 With the increase in environmental pollution, chronic diseases caused by low-grade metal exposures are on the rise. Typically, patients afflicted with environmental diseases suffer from diffuse symptoms and the diagnosis and treatment of these sub-acute multiple exposures largely depends on proper laboratory evaluation, which in turn aids in the selection of the appropriate chelating agent for treatment. [4- JAMMR]

Therapy options include the induction of a synthetic solutions- the first is called EDTA (ethylenediaminetetraacetic acid) and is injected into the bloodstream to remove heavy metals and/or minerals from the body.  [3] Another medication is DMSA (dimercaptosuccinic acid) which is recognized to mobilise and enhance the excretion of lead from the storage sites in the body that are most directly relevant to the health effects of lead. The intravenous application of DMPS (dimercapto-1-propanesulfonic acid) is most useful for the diagnosis of multiple metal overexposure. It is also the treatment of choice for Antimony (Sb), Arsenic (As), Cadmium (Cd), Lead (Pb), Mercury (Hg) and Copper (Cu)  binding ability of the chelators tested. [4]

A provocative chelation test with DMSA could thus have wide potential application in clinical care and epidemiological studies. (see NCBI/NIH). Over-the-counter prescription versions are available for DMSA to rarely treat severe overdoses of lead and other heavy metal poisoning and the compounds of each are also available in health food stores as supplements.

Indication of calcium deposits under the skin is being explored by Dr. Robert Bard, (diagnostic imaging specialist- NYC) under an exploratory collaboration project with various chelation therapy experts.  It is believed that this evidence of calcification may be related to the same plaque that appears in the bloodstream leading to atherosclerosis and/or coronary artery disease.  Some chelation treatment experts theorize that EDTA “identifies and extracts” calcium deposits (or plaque in the bloodstream and arteries) to reducing the risk of heart disorders. [3] 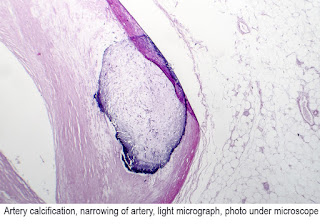 Dr. Bard’s concern about these pockets of calcification started when a curious group of patients from a related geographic region showed similar lesions in the skin.  With his arsenal of technical imaging innovations, he applied various scanning tactics and device applications to accurately harvest data on the patients’ skin disorders. (See Doppler Ultrasound Imaging, Elastography,  Reflectance Confocal Microscopy and Optical Computed Tomography).  He is also heavily aligned with other imaging facilities and experts in the radiological and dermatology communities (Mt Sinai, Cornell, Columbia) to review these findings. “I do not see calcification as an endpoint disorder, but (instead) evidence of an ongoing problem tracing its origins and also where it grows from there. My concern about these plaque like  masses are predictors of serious dermal disorders…As foreign substances uniquely embedded in the dermal layer they can grow into larger masses  that can either rise to the surface of the skin, causing  cancer or re-materialize into the bloodstream causing  emboli and thrombosis “ 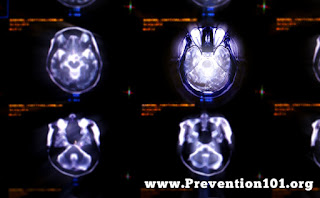 WHAT IS GADOLINIUM? TOXICITY REVIEW
On a 2017 report by the Indian Journal of Radiology and Imaging, new and compelling evidence has been presented concerning the accumulation of residual GADOLINIUM (GBCA) in the brain of patients with normal renal function following the administration of GBCA - as an MRI contrast agent. This calls for amendments in the current contrast administration protocols. (source link: NCBI/NIH)
Researchers have identified conditions from extended accumulation of gadolinium including reduced kidney performance (dysfunction and possible failure).  Gadolinium-associated plaques are also known to form nephrogenic systemic fibrosis (NSF). Lastly, known retention of gadolinium has been found in the brain, bone, skin, and other organs and tissues with patients with impaired kidney function.
The U.S. Food and Drug Administration  made a safety announcement in July 2015 stating that it is investigating the risk of brain deposits following repeated use of GBCAs for MRI. It suggests health care professionals to consider limiting GBCA use to clinical circumstances in which contrast administration provides important additional information, so as to reduce the potential for gadolinium accumulation. It also urged physicians to reassess the necessity of repetitive GBCA MRIs in established treatment protocols.[see FDA link] 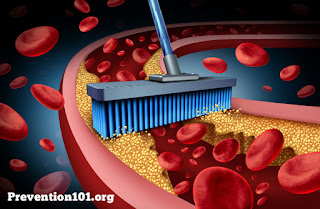 Over the decades, numerous scientific studies and articles have highlighted the ability of Vitamin C to be active against cancer.  An article appearing in Free Radical Biology in Medicine in 2009 entitled “Pharmacologic Concentrations of Ascorbic Acid by Parenteral Administration Exhibit Antitumoral Effects” is one example.  Another article appeared in the British Journal of Cancer in 2001 titled “Cytotoxicity of Ascorbate, Lipoic Acid and Other Antioxidants and Hollow Fiber In Vitro Tumors.”  More recently an article appeared in WebMD April 3, 2017, “IV Vitamin C Boosts Chemo’s Cancer-Fighting Power.”  An article entitled “Mainstream Researchers Finally Admit Vitamin C Kills Cancer” appeared in the NaturalNews.com.

We have been using infusions of Vitamin C for decades with sometimes dramatic results.  So far we have been talking about treating diagnosed cancer.  How does this relate to prevention?  Back to the cells.  The beginning of cancer is an abnormal “genetically mutant” cell.  If it is allowed to reproduce, it eventually creates cancer.  If intravenous Vitamin C is helpful in treating cancer which has millions of cancer cells, would not intravenous Vitamin C be potentially very helpful in handling a few abnormal cells before they become tumors?  In other words, utilizing an infusion of Vitamin C periodically would seem to be a very important part of a cancer prevention protocol.  Kill off a few cancerous cells before they become many.  Important note:  The amount of Vitamin C necessary to achieve this is much greater than is obtainable through oral Vitamin C.  Therefore, the infusion route is necessary.  Certainly taking some Vitamin C orally in addition is okay and helpful but it is not adequate enough to be effective for killing cancer cells.

“What things can contribute to causing the genetic mutations occurring in the first place?”  This research and observations have also been done over the decades identifying hundreds if not thousands of various toxic chemicals, toxic metal exposures that contribute to these genetic perturbations that result in cancer cell production.  In addition, the majority of the body’s immune system which is designed to protect us against abnormal cell production is located in the intestinal tract so ideal intestinal tract function is of critical importance in the prevention of cancer.  Diagnostics to identify the presence of toxic substances, i.e., various classes of chemicals, insecticides, pesticides, herbicides, solvents, etc., and toxic metals can be identified and most importantly therapeutic modalities to decrease those exposures are also available. If you have a family history of cancer or if you are just concerned about cancer for yourself for various reasons, you have been exposed to things in the past, whatever the cause or causes of your concern, something can be done about it!  The age-old adage “an ounce of prevention is worth a pound of cure” is definitely valid when it comes to cancer.

contamination that may align with various cancers.

Medical Imaging Review: What does a Covid Lung look like?

All research and testing programs undergo an evolutionary staging of its data-gathering and problem solving approach.  The process of gettin... 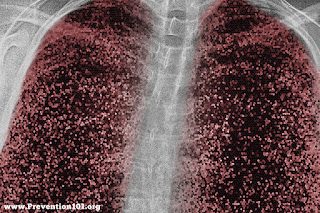