CAN YOUR NAILS IDENTIFY CANCER? - By: Dr. Robert L. Bard

Advanced radiology is more than the use of X-rays with Doppler Ultrasound and MRI studying blood flow to detect cancer in literally every organ of the body.  This can be done before a biopsy.  Such is the case with the human NAIL. Outside of an apparent BRUISE from slamming your finger on something, an unexpected nail deformity like a divot or a ridge that runs the length of the nail are abnormalities that could be clues for something worse. Thanks to ultrasound technology, a brown spot on the nail can be identified as a blood vessel that broke or it may actually be a highly malignant melanoma skin cancer. This may be differentiated  with this technology in minutes.

There are two types of diseases that affect the nail. One is medical disease like diabetes ,  kidney disease or lung disease, that show up differently. And then there are surgical diseases of the nail such as cancer and benign tumors. Also common are benign bony overgrowths that can be taken care of by, for example, a podiatrist or an orthopedic surgeon. Just taking out the jutting spur of bone resolves the problem with the abnormal nail.

A full nail in a young person grows around three months and in an older person about six months. That means six months of nail is essentially one's complete medical history- in an entire nail.  You can see the progression of the disease and also if it's growing out and not getting worse, it's not going to be a cancer.

But thanks to modern medical imaging machines, there is a way to find out the problem before  waiting three to six months.  We use a regular ultrasound machine to show the thickness of the nail, which is important since antifungal creams will not penetrate through a nail plate deeper than 1.8 mm. Then we use the blood flow to see if there are any abnormal vessel flows in the nail and what it means. For example, when you have psoriasis, which is a common dermatologic problem, it not only thickens the nail but it's associated with arthritis in about one third of people and increased risk of cardiovascular disease.  So one third of people with fingernail psoriasis with perceptible blood vessels on Doppler imaging will develop arthritis and other ailments which is something we're currently learning more about.

There are over 29 different abnormalities of the nail that can predict problems or tell you what the history of the body has been in terms of health.    For example, clubbing of the nails is very common in pulmonary disease like chronic obstructive disease, the smoking lung. In anemia, the nail gets a spoon shape. Generally arthritis causes light vertical deformities while melanoma will produces vertical dark stripes. 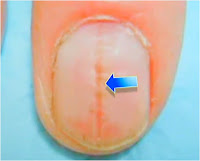 To distinguish if it was an injury or if it's actually a health issue, we can first ask for a history of injury but you could immediately examine the Doppler blood flow, which will show you what's going on.   When you have pitting of the nails and psoriasis, the next step is to put on the Doppler to see how many abnormal blood vessels are present. A lot more blood vessels means the psoriasis will be more aggressive and it'll mean the chances of getting arthritis are much higher. 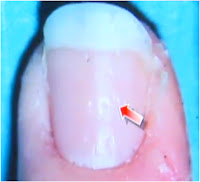 People should look at their nails more often for any indication of something that's worse going on in the body. They may be able to catch it early enough by looking at their nails.   Digital diagnostics can predict what's going on and also the likely outcome. 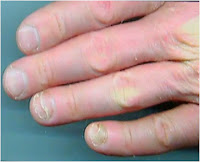 They are most often misdiagnosed as a psychiatric disease. They're told it's in your head;  because it's hair falling out or you're getting older.   It's missed a lot and so many symptoms are associated with it that you go to a GI doctor for it and they don't look at the parathyroid. You go to the cosmetic person for your hair and they don't check that. But we can check it with the Doppler machine. 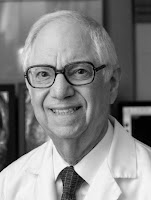 As of Jan '18, Dr. Robert Bard spearheaded a partnership with a host of cancer educators, medical practitioners and non-profit foundations (allied under AwarenessforaCure.org) to form a public resource program to aid in the advancement of the public's understanding about self-preservation from cancer and other chronic diseases. EARLY DETECTION & PREVENTION is a global health movement that promotes a higher regard for "clean living" - from toxins and a toxic lifestyle. Our program consists of four main efforts: EDUCATION, COMMUNITY CONNECTION, CURRENT NEWS & CLINICAL RESOURCES. EARLY DETECTION & PREVENTION brings the empowerment of wellness through group seminars, videos and the distribution of current articles & newsletters published/shared to all the major cancer charities and their members.


For more information or to subscribe to our EARLY CANCER DETECTION & PREVENTION PROGRAM newsletter, contact Bard Cancer Diagnostics today at: 212.355.7017 (www.BardCancerDiagnostics.com)- or email us at: bardcancercenter1@gmail.com 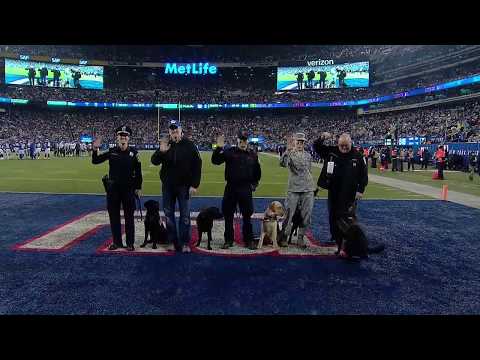