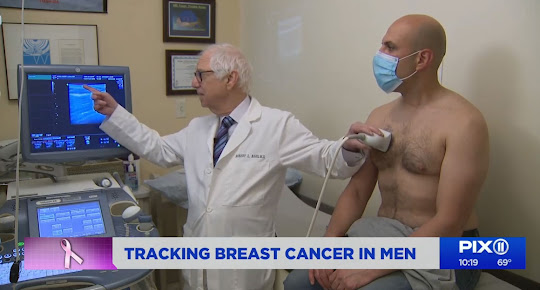 In an interview with survivors, oncologists and Dr. Robert L. Bard (cancer radiologist/NYC), there is one loud message transcending throughout this powerful report: "Male Breast Cancer is Very Real... and ANYONE can get it!"

According to the Male Breast Cancer Coalition, government health reports show an estimated 2550 new cases in US with a mortality rate between 280-480. This indicates that over the past 10 years, new cases are up by 22% and mortality rate is up by about 19% from previous years. Advocates collectively attribute much of these numbers due to the lack of public information, misdiagnoses and the emotional resistance in men about a commonly "female" disease. "Our Mission is to educate people all around the world to the risk of breast cancer in men, ultimately giving men the same fighting chance that their female counterparts have... just like Lung Cancer, Brain Cancer and Liver Cancer-- it knows no gender, age or race." says MBCC co-director Cheri Ambrose. "We hope to have breast checks included in all annual physicals for men one day- combined with updated intake forms asking for cancer in families will go along way in helping to change the way breast cancer is viewed."